Health Column for body and mind

The benefits of Himalayan Salt

Every cell in our body needs salt to function. We rely on this mineral to promote circulation, hydration and detoxification. When we sweat or go to the toilet, we lose salt, which means we need to keep replacing it in order to help stay in optimum health.

Salt has gained a bad reputation due to the overuse of table salt, a highly processed substance which is extremely toxic in large quantities. This "salt" is used in all processed foods as a preservative and to add flavour. It also makes the food more addictive, leading to over-consumption. Due to its synthetic additives, our bodies find it hard to dissolve, meaning it builds up in our organs, leading to a range of serious health problems. This is why health officials warn against having too much.

So our bodies need salt but we are warned against salt. What is the solution? 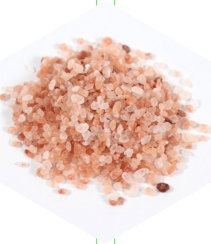 Himalayan salt is believed to be the purest salt found on Earth. It is an ancient rock found in the Himalayan mountains. Around 250 million years ago, this salt was covered with lava, then later, concealed with ice. This preserved all its nutrients, whilst protecting it from impurities. It is untouched by many of the toxins and pollutants present in other forms of salt, making it a far superior and healthier option.

It is well-documented that eating too much regular salt is bad for your health; however, this is where Himalayan salt comes into its own. It contains the same 84 natural trace minerals and elements found in the human body. Its alkaline minerals help to keep us hydrated, fill our body with necessary electrolytes so our cells work properly and it balances our sodium-potassium ratios. Himalayan salt contains all the trace elements needed for proper thyroid, adrenal and immune function. It boosts digestive enzymes which allow our bodies to extract nutrients from the food we eat, and helps us to digest and flush the waste out properly. It is without the chemical additions and bleaching that is found in table salt, and without the ocean pollutants that is found in sea salt. Its minerals exist in a colloidal form, meaning that they are tiny enough for our cells to easily absorb.

Comparing Himalayan salt with: Table Salt
This is the stuff that comes in those tall containers with the different sized holes from which you can shake perfectly formed white balls onto your plate. It can also be found in those little glass shakers in restaurants. To process, the once-natural salt is heated to extremely high temperatures to remove impurities. This method strips away most of its natural minerals. Synthetic chemicals are added, to try and put back what the heating process took out. Things like naturally-occurring iodine, without which our thyroid suffers, leading to metabolism and growth problems. A synthetic form of iodine is added, along with other manufactured chemicals such as calcium phosphate (an anti-caking agent to prevent clumping), sodium bicarbonate, fluoride, aluminium derivatives and toxic amounts of potassium iodide. As if all that wasn't bad enough, the salt is then bleached white.

This salt is the reason we are told to lessen our intake, due to the many dangerous effects it has on our health. High blood pressure is one of the major risks; this happens because the body is holding onto more water to try to deal with the anti-caking agents, causing water retention. The extra stored water raises the blood pressure. The more of it we consume, the higher our blood pressure will rise, which, if left unchecked, will lead to heart disease and strokes. It wreaks havoc on the circulatory, nervous and lymph systems, and is specifically hard on the liver, thyroid and kidneys as those organs try to process and remove the synthetic toxins from our body which are unable to absorb.

Unfortunately, it is used in abundance in processed food. Too much of this kind of salt is toxic to our bodies and it's best to stay away from it as much as possible. The issue is not actually about limiting our intake of salt; it’s about consuming more natural, home-made, whole foods and using the right kind of salt;

Sea Salt
Proper sea salt is 100% pure salt, which already makes it a much better choice than table salt. However, our oceans are polluted and getting worse every year. While it's not going to cause half of the problems that the synthetic table salt does, it's still not as pure and beneficial as Himalayan salt. If you're reaching for sea salt as a healthier alternative, try to stretch your budget just that little bit further to Himalayan salt.