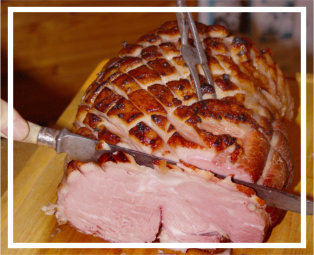 We get all of our gammon and bacon from Sandridge Farmhouse in Wiltshire.  They rear their own pigs, and do all the curing and smoking on site using traditional methods to ensure the best quality you can buy.  Their pork is high welfare and free from artificial hormones, growth promoters and routine antibiotics. They do not inject the meat with water, so when you cook your bacon, it does not shrivel to half it’s size in a puddle of white, instead it’s the finest bacon you will eat.

Recipe
If you are going for a large gammon joint, then it’s best to simmer the gammon and then finish by roasting.  If it’s a smaller joint (2kg of less) then I would just roast the joint.

Boiled and roasted
If your ham is a large portion or a whole ham, place while vacuum packed into gently boiling water. (Leaving the ham in the vac pack seals in a lot of the flavor and prevents the ham from becoming crumbly).

(Warning only to be done at gentle boil, not at a full Boil)

When the bag starts to loosen around the meat (this should be half way through your calculated cooking time), lower heat to a simmer. Remove from the vac pack and place into the same water. Then add a carrot, onion, celery and bay leaf to the water for flavour.

Continue to boil until the center of the ham reaches 68°C then turn off the heat and leave the ham in the water for up to 1 hour until the temperature reaches 71°C. Your ham is now cooked!!

Coat the ham with the glaze of your choice!  Glazes can be as easy as mixing whole grain mustard to honey (50:50) adding caster sugar / brown sugar to glaze can help it to stick to the ham better.

For a beautiful finish, a clove can be added into the centre of each cut diamond!

Pre-heat oven to 160°C and roast for further 35 min average to reheat prior to meal!

Remove the cooked ham from the oven and allow the ham to rest for ten to fifteen minutes.