CRAFT BEERS - It's in the Can!

You may well have noticed that more and more of your favourite craft beers are now available in cans. This is nothing new as canning is an early C19 invention originally developed to enable the military to have supplies of food which would not go off.

Traditionally beer has been bottled since the C17 and has been available in cans since the 1930’s. Ring pulls were invented in the early 1960’s and the stay tab, which is not discarded when the can is opened, came into use in the 1970’s.  However canned beer has had a certain stigma and for a long time cans tended to be used for the cheaper types of lagers. The migration from bottles to cans began in the USA in 2002 and now many British craft brewers offer their brews in cans. 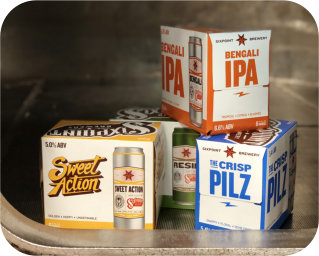 There are many reasons why brewers are starting to can beer.  Firstly, a can is much lighter than a bottle which makes shipping costs much cheaper. This is a major factor if you are exporting beer or sending it all around the UK.  Secondly, aluminium cans are easy to recycle and have considerable scrap value.  A tonne of aluminium is worth £250 whereas a tonne of mixed glass (cullet) is only £12.  Thirdly, cans completely protect beer from being “light struck”, a phenomena which can create off flavours in beer which has been in direct contact with sunlight.  This is why most beer bottles are brown as dark colours are less likely to let in light as opposed to clear or green bottles.   Fourthly, cans are light to carry home from the shops and are less likely to damage if dropped.  They are also easier to take out with you. Fifthly, discarded cans don’t cause any damage whereas broken glass is dangerous. Cans can also be put in household recycling bins whereas bottles have to be taken to bottle banks. Finally many brewers are taking advantage of the surface area of a can to commission bold artworks to decorate their brews.  Many beers come in very striking abstract multi-coloured cans which really stand out on the shelves.

The above arguments should convince most brewers to adopt canning.  However there are a few disadvantages.  Firstly, a canning line is very expensive to set up and represents a big investment for a brewery.  Small breweries who do not have the finance or space can sub-contract canning to a larger brewery and there are even mobile canning contractors who will visit your micro-brewery.  Many very small breweries still bottle beer by hand and probably will continue to do so. Secondly, cans are still associated with cheap bargain beers whilst bottles are seen as a sign of tradition and quality. Thirdly, cans warm up more quickly than bottles although they do chill down much faster.  Fourthly, cans tend to be available in a limited range of sizes. In the UK almost all canned craft beer seems to
come in 330 ml cans whereas beer bottles come in 330 ml and 500 ml sizes and sometimes even 568 ml (1 pint).  There is also a myth that cans may impart a metallic taste to beer.  This may have been the case many years ago but today cans are lined with a very thin epoxy layer which keeps the liquid from being in direct contact with the metal. Another minor point is that once a can has been opened it cannot be re-sealed whereas a bottle can be closed.  This may mean that bottling is a better option for very strong beers such as barley wines and imperial stouts.

As I was putting this article together a sample of some US canned craft beers arrived and I thought it would be interesting to include my tasting notes with this article on canning.  The beers were brewed by Six Point Brewery, Brooklyn, New York and are imported into the UK by Heathwick. Six Point started in 2004 and the name comes from their symbol, the ancient six pointed brewers star. Their motto is “Beer is Culture”, well who would argue with that? The beers I am reviewing below are Six Points core offering but they also brew a wide variety of other styles of beer including Kolsch, Porter, Gose and Barrel aged Rye.

Six Point The Crisp Pilsner 5.4% abv.
This beer is made with German Tettnang and Hallertau hops and Cargill Pilsner malt. It pours a golden colour and has a biscuit aroma.  This beer certainly lives up to its name with a crisp, dry flavour which is far removed from the mass market industrial lagers.  This is a very fine beer which is neither sour nor bland.  I think you could drink this with most meals or on its own.

Six Point Sweet Action Ale. 5% abv.
This beer pours a copper colour, has a peachy nose and is full of flavour with tangerine and lemon predominant.  The beer is made with barley, wheat, and flavoured with El Dorado and Simcoe hops. Sweet Action refers to a short-lived women’s magazine which was published in Brooklyn.  This is an easy drinking beer which would go well with Asian food.

Six Point Bengali IPA 6.6% abv.
This is a big beer in terms of flavour and strength.  Personally I find beers over 6% abv. a bit heavy going, especially with a meal.  The beer has a citrusy, grapefruit aroma and a massive, intensely citrus taste, a bit like undiluted orange squash.  In the US these “hop bombs” are very popular but the very strong flavours may not be to everyone’s taste.

Six Point Resin Indian Imperial Indian Pale Ale (IIPA) 9.1% abv.
First, there was India Pale Ale, then there were stronger versions which were known as Double IPA (DIPAs) and now we have the Imperial (very strong) India Pale Ale (IIPA).  One of the things I really like about beer is that it is constantly evolving and new styles are always cropping up. I approached this beer with considerable trepidation but was pleasantly surprised.  This golden coloured beer with its lemon peel aroma is actually quite a pleasant drink to sip slowly, perhaps at the end of a meal or as a nightcap. It has a dry, piney, resinous flavour.  The beer is rated at 103 IBU (International Bittering Units) Lagers will have 10-20 IBU whilst a stout may be around 50 IBU.  103 IBU is probably the most bitter that a beer can be and still remain drinkable.

Special thanks to Six Point Brewery, Heathwick Ltd and Petlow PR for supplying the beers tasted in my article.