Felinfoel brewery has its origins at the Kings Head pub, Felinfoel, Llanelli in the 1830s. Like many pubs of the time, it brewed its own beer which was very popular locally.  In 1878 the owners decided to build a brewery near the pub which is still producing beer.  It is family owned and is the oldest Welsh brewery. The brewery has over 80 pubs in South West Wales and also supply to around 350 outlets.  Felinfoel were the first every brewery to can beer back in 1935.  Tinplate was a major industry in the area and the brewer felt that it would be beneficial to the local steel industry to be making cans for the brewery.  Today we have a seen a move towards cans led by new craft brewers but Felinfoel were the real pioneers. 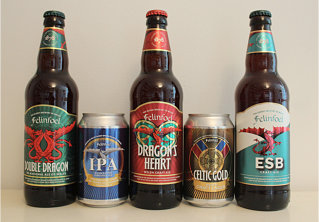 I have been sampling some of their beers, including some in cans.  Here are my tasting notes.

Felinfoel ESB Bitter Craft Ale 4.6% abv.
This is slightly sweeter that an average bitter. It is amber in colour with a balanced toffee apple taste.  ESB stands for Extra Special Bitter and usually indicates a stronger beer in the 5-6% abv range.  However in this case the brewery is calling this brew ESB to distinguish it from its other bitters.

Felinfoel Double Dragon 4.2% abv.
This is a deep copper red ale with a nutty, toffee, leafy bitter taste.  I thought this was more of a conventional bitter.

Felinfoel Celtic Gold Lager 4.8% abv.
I would like to see more craft breweries having a go at brewing their own lager.  The heavily advertised big brands dominate the market but they are all rather bland.  This light gold lager has a clean, dry, bitter taste and was far superior in flavour to the industrially produced lagers.

Felinfoel Dragon’s Heart 4.2% abv.
This is another ruby coloured bitter beer which was not dissimilar to Double Dragon.

Felinfoel IPA 3.6% abv.
This is a dark golden beer with a slightly citrusy bitter taste.