We may have voted to leave the European Union but there is still plenty of time to sample European beers. Germany has been a leading beer producing country for many centuries. In 1516 the Reinheitsgebot or Germany Beer purity law was passed which proclaimed that beer could only be made from water, barley and hops. Yeast had not yet been discovered and beers in the old days fermented through the actions of wild air-born yeasts. Many German beers are still brewed to this specification whereas much industrially produced beer contains adjuncts such as rice, maize and sugar. Germany is best known for its lagers and for many years British brewers sold their lagers under German sounding names. Does anyone remember the awful Hofmeister lager with its “follow the bear” commercials and the rather tacky “Bierkellers” that opened in many towns? Lager is still very popular in Germany but there are also a number of very distinct regional styles of beer. I am always looking for new types of beer and feel that Germany offers some interesting beers. Here are a few that I have sampled recently. 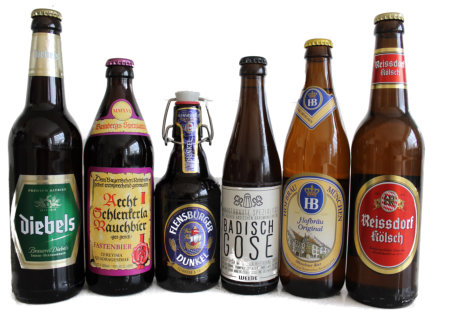 Diebels Alt Bier 4.9% abv
Alt beers originate in the northern German city of Düsseldorf. Alt; which means old, are beers that are top fermented, like our traditional English ales. Indeed Alt beers can be seen as a version of English bitter. Alt pours a dark copper colour and has a distinct hoppy aroma. It has a very pleasant balanced taste with caramel undertones and a distinct bitter finish. Diebels Brewery is located in the town of Issum, which is near the Dutch border and a few miles North West of Dusseldorf.

Reissdorf Kölsch 4.8% bv
Kölsch is another German regional style, this time originating from Cologne (Köln in German). This is a type of lager/ale hybrid, in that it is top fermented, like a British ale, but cold conditioned like a lager. This could be seen as a German version of a Golden Ale which of course is a relatively new style of beer in Britain. The beer pours a lovely golden colour and has a floral aroma and a good citrus taste. A very refreshing summer beer for those who want to drink something more flavoursome than lager.

Hofbrau Original Munich Beer 5.1% bv
This is a Helles (pale) lager which is the most popular style in Bavaria in Southern Germany. Hofbrau is a golden lager with a grassy aroma and a smooth, almost buttery taste. This is a very fine lager by which all other lagers should be judged. It is brewed in Munich by Hofbrau who also offer a wide range of German beer styles.

Aecht Schlenterla Rauchbier Fastenbeir (Lent Beer) 5.5% bv
This is something for the person who likes a really different drink. This beer is an unfiltered, smoked lager and is about as far removed from the tasteless industrial lagers as you can get. In the old days all beers had a smoky taste as the malt was toasted over an open fire. By the mid C19 most malt was heated in an oven but in Bamberg, which is near Nuremburg, the open fire tradition persisted. The beer pours a cloudy reddish brown and has a very smoky aroma. The taste is full on with smoke, malt and bitterness all coming through. This is a strongly flavoured beer that would go well with BBQ meat or ribs. The Historic Smoked Beer Brewery “Schlenterla” is located in the centre of Bamberg and brews no less than seven different styles of smoked beers. This Lent beer is traditionally only sold between Ash Wednesday and Easter.

Flensburger Dunkel 4.8% bv
Dunkel means “dark” and this is a Munich style dark lager. It may seem strange but lager is a style of beer created by bottom fermentation and cold storage. Although dark lagers are quite rare they are made by quite a few breweries in Germany and other countries. The beer pours a copper brown and has a caramel aroma. The taste is quite sweet, almost fruity, perhaps a hint of cherry coming through. Flensburger is brewed in the town of Flensburg which is in the very far north of German, near the Danish border.

Handgebraute Badische Gose 4.6% bv
This is an unusual style of beer which had almost been forgotten. Gose originated in Goslar which was in East Germany. It is a wheat beer brewed with the addition of a very small amount of sea salt and coriander. The beer pours a cloudy orange colour with a tangerine aroma. The taste is very sweet with pineapple and citrus flavours coming through. A very refreshing drink with a mouthfeel more like a cider. It is brewed in Plankstadt which is near Heidelberg in the south of Germany. A number of US breweries have also recreated this unusual style of beer.