Craft Beer - How Is Beer Made?

Water, grain, hops and yeast are the four ingredients you need to make beer. So how do we turn these ingredients into delicious beer? Lets find out! 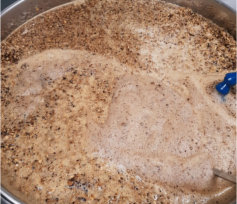 This is the process of mixing hot water with malted grain consisting of barley, wheat and other grains depending on the style of beer. The grain is crushed beforehand to expose the natural starches within. These are then converted to sugar by the grains own enzymes. This sugar is a food source for the yeast to gorge on creating alcohol and carbon dioxide as a by product.

Lautering
After the mash more hot water is added to the top of the grain bed to rinse all the sugary liquid called wort which is transferred to the boil kettle. 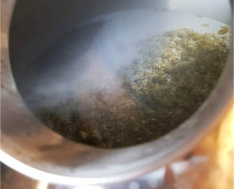 We then boil the wort for an hour or more. This stops the enzyme process of the mash and fixes the amount of sugars that will be available to the yeast. The boil also ensures the wort is sterile.

Fermentation
After the boil the wort is cooled and transferred to a fermentation tank. Yeast is added and then left to ferment turning the wort into beer! For some beers such as IPA’s we add more hops to give it more aroma and flavour. This is called dry hopping.

Once the beer is finished fermenting its left to mature for a bit. This lets the yeast clean up any unwanted by-products such as diacytal which tastes a bit like butterscotch!

The yeast is then extracted from the bottom of the tank. Our uni tanks allow us to ferment and condition all in one tank.

So that’s how beer is made!

The shop is now open on Saturdays Visit the website for more info.