Beer tastes better in a bottle?
Myth! - Breweries put the exact same beer into bottles as they do in cans. Preconceived ideas however can be a strong factor in the opinion of cans. If we go back a number of years before the craft beer revolution the only beer you could get in cans would be from big corporate breweries which lets face it was not great. Its no wonder why you might be put off drinking anything in a can! These days however there is an amazing choice of beer in cans... Thank goodness! What about that tinny taste? All modern cans are lined to prevent any flavour contamination. You could perhaps get some sort of taste drinking direct from the can but its best practice to pour the beer out into a glass.

Cans keep beer fresher?
True - Cans keep light and oxygen out which can damage beer giving it an off flavour. Some hops are light sensitive and when exposed to light through glass photo oxidation takes place giving it a skunky flavour. Brown bottles are better but still do not eliminate light exposure.

Bottle caps do a good job at sealing but over time they do let some oxygen in. This can affect the flavour of the beer. Hoppy beers in particular do not do well however for some styles such as Belgium, sours and barley wines bottles can be advantageous to help age and improve the flavour. Cans double seal the lid on top ensuring that no oxygen can get in.

Which is better for our planet?
Materials
Aluminium cans require mining the mineral bauxite which can destroy habitats and contribute to soil and air pollution. A lot of energy is then required to refine it into aluminium. Glass is made from silica, sand and limestone which are quarried. Iron, sulphur and carbon are added to make the glass brown. It is much less energy intensive to create glass than it is to create aluminium which takes 15x more energy. Doesn't sound great does it but hear me out. It only takes 8% of the initial energy to create a new can out of a recycled can.

Transportation
Cans are much lighter meaning it takes less energy to transport them around reducing carbon emissions. They also take up less space reducing cargo loads.

The packaging is a major part of the environmental impact of the life cycle of beer. 42% for cans and 55% for bottles so its a very close call but cans come out slightly on top when you take in all the factors. 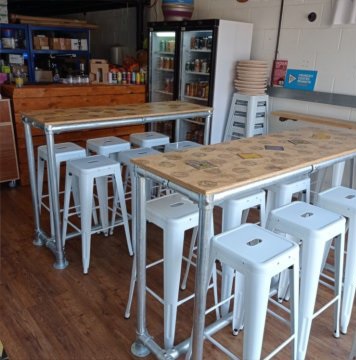 Why we changed to cans
We used to bottle condition our beers but moved to cans to help keep our beer as fresh as possible. Our IPA SkIPA could taste amazing two weeks after bottling but would age too quickly losing hop aroma and taste. Cans allow us to put out a more constant product. Space is at a premium at the brewery so cans allow us to make the most of the space we have. We would need two pallets of bottles for the same amount of cans on one.

Brewery updates
New tanks have arrived however this has caused a delay in getting our brews out. We should hopefully have our own beers available by the end of August at the latest. Keep an eye out on Facebook and Instagram for updates.

Indoor seating!
We have a few tables inside the brewery for drinking in. Extra outdoor seating will be available on Saturdays when the weather permits.

Currently guest cans only but once we have our beer ready we will finally have some draught keg and cask on tap!

By
Jonathan Khoo, Brewer & owner at The Emsworth Brewhouse